Present-day you meets 10-years-ago you for coffee. Share with your younger self the most challenging thing, the most rewarding thing, and the most fun thing they have to look forward to.

How amazing is it that the most challenging, rewarding, and fun thing you have to look forward to are one in the same?!  Izzy, Kash, and Coco; my grandchildren!

Most challenging:  They will come to live with you just two weeks after you have a complete thyroidectomy.  Your stamina will not have returned and, more importantly, neither will the volume of your voice.  They will spend 16 months with you and Steve and you will fight like crazy to ensure their success and safety!

Most rewarding:  Seeing how each of the kids changed and grew and learned to be their own person. It was so cool when Kash opened a book at Christmas and said, “This is my favorite author…Grandma, did you ever think I would say I had a favorite author?”

Most fun:  Saturday trips to the library, family bowling and movie nights, watching them play with new “cousins”, singing Coco to sleep and then spending quiet time with Izzy talking about life, watching Sponge Bob Square Pants with Kash…too many fun things to capture in one posting.

Challenging, rewarding and fun will not do justice to the experiences in store for you.  Enjoy it.  Savor it. Relish it. Remember it.

Most days I try not to dwell on the fact that I don’t know where our grandchildren are living. After they went back to Phoenix in August 2012, we had an address.  I could look at their apartment on Google Earth and see that it was right across the street from the school where they were enrolled.  It was shocking to me that I could find comfort on the internet, making me feel as though they weren’t 2,000 miles away.

The address we had also allowed for packages and cards or letters to be sent. I would fill boxes with random trinkets, little boxes of candy, school supplies, gift cards, what have you. I’d find things that I thought each child would like.  The  wrapped packages were sent with great care and shipped so I could track them; ultimately seeing that one of the children signed for it when it was delivered.  I felt connected somehow, especially when the phone calls stopped.

The last package I sent was in July. Unbeknownst to us they had moved.  The package was returned.  I was devastated, again.

An eternal optimist, regularly accused of being a “glass half full” kind of person, I continued to post fun things to my grandson’s Facebook page. Fun videos or pictures, snapshots of me and his Grandpa, hoping that the posts let him see that we still think of him and his sisters every day!  Today my patience paid off.

One Facebook message session from him that lets me know he, and hopefully his sisters, are okay.

What’s better than a new Barbie for Christmas?  Nothing if you’re a five year-old little girl!  There were over twenty people walking around her in the living room, but it didn’t matter.  She was in her own world for a full half an hour…dreamy, for sure!  It even went to bed with her on Christmas night.

My nephew Eric, father of Liam, husband of Karin, did this amazing presentation and blog recently. Please take a listen, and don’t worry–the picture will be upright a minute into the video so you won’t have to hold your head sideways to read it.

I’ve got frustrations with school posts left to post, and I’ve yet to recap our trip to the zoo to meet Anton, and over the next few days Liam will be transitioning from his trusty LTV-900 ventilator to a newer, lighter, quieter and more computer driven TRILOGY vent ( you may be surprised to learn that the quieter part of that is what is giving me anxiety as we have been living our lives to the rhythm of Liam’s breath for five years, I’m afraid of not hearing that, especially at night). In other words, I’ve got so much more to post but if you’ll endulge me, this one will be one last post about my trip to Philadelphia last week to speak at the Bayada Pediatrics 2014 directors forum.

This morning, they were kind enough to send a video of my speech that one of the forum participants…

The grandkids got used to our two cats very quickly after they arrived.  This kitty, Bubba, took a particular shine to our grandson.  He liked Kash so much that he’d mark the poor kid’s backpack on an almost daily basis.  One day Kash saw Bubba sitting and staring into the picture hung on the wall.  We couldn’t figure out what on earth he was trying to find since it’s a print of a pasture and cows.  It’s the picture that first came to mind when I saw the Weekly Photo Challenge this week!

Photo Challenges I Liked This Week:

Even though the kids went back to Arizona two years ago, I find birthdays and holidays still difficult.  Their mom decided that she doesn’t want us to have contact with them.  I understand why, in her mind, it’s better for us to not be communicating with the kids, but of course I don’t agree.

Until this past July I was able to send packages and cards to them, but the last one came back as undeliverable.  The reason from UPS was that they couldn’t find a forwarding address.  Clearly, their mom is making every effort to make sure we cannot reach the kids in any way at all. I know it sounds sad and, it is.  I imagine it is sad and confusing for the kids, too.

Today is Izadora’s fourteenth birthday.  We miss her and love her very much, and find comfort that we have pictures and memories of her time with us.  Hopefully, she is remembering her time here as happy, too.

Are children and grandchildren are so important to us as parents, grandparents, aunts, uncles, moms and dads. Please take a look at my nephew’s blog The Names of Things, and enjoy!

Liam’s agency and dignity being among our top priorities as parents, it’s important to us that , whenever possible, Liam get to choose what is done to/for him. Unable to speak, or point, or  grasp, Liam communicates his wants with eye gaze and head nods. He picks out his outfits every day (between choices given him by his stylist.) Sometimes he decides in an instant. Sometimes he needs a little while to think about it, and sometimes he just can’t be bothered with the demands of making his own decision. He’s five. I’m gonna just assume that all that is universal.

The thing is, when Liam is really alert and engaged in the decision-making process, his preferences are apparent. His attitudes obvious, even strangers would have no problem recognizing his meanings. So it was the first friday night in June during the Dream Night festivities at the Roger Williams Park Zoo…

On July 9th I mistakenly counted only 20 days until my year-long journey of posting a thank you each day would be over… I counted wrong.  Maybe it was because that had been my 345th post and so I just assumed there were 20 days left.  I just looked at the calendar and realize that TODAY is 20 days to go.  There have been times when I posted twice in one day by responding to the weekly photo challenge.  I’ve also missed two days of posting all together, perhaps that evens things out in the long run.

I haven’t run out of things to write about yet, thankfully.

I went today to send a package to my grandchildren in Arizona.  When they first moved back it was a weekly ritual, going to the local UPS store to ship a package of trinkets, clothes, or other items found in their…

This is one of my favorite pictures of Kash, our grandson, when he lived with us.  He was out for the day with Aunt Sue and Uncle Paulie, at the Crescent Park Carousel.  He had such a blast!  The little extra detail in this photo is the unhappy face on his t-shirt character; it was so opposite to his jubilant face and experience of the day!  Thanks Aunt Sue and Uncle Paulie, for giving the grandkids such great memories!

Does it ever make sense to judge a book by its cover — literally or metaphorically? Tell us about a time you did, and whether that was a good decision or not.

When our grandchildren lived with us, we went to the library every other Saturday.  Enough books for two weeks of daily reading would fill our reusable shopping bags and piled into the back of my car.  My granddaughter, Coco, at 5-years-old, would go to the picture book section of the children’s room to find the twenty or so books that interested her.

I would, of course, try to find books for her.  I picked out my favorites from childhood, Stone Soup, Caps for Sale, Mike Mulligan and His Steam Shovel; show them to Coco, and predictably she would say, “nah, I don’t like that one.”  Inevitably, she would pick out the books by looking at the cover and… 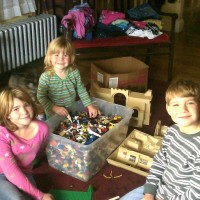 My Life In Pictures